It was a very exciting time for the seven of us when we got our Gambian names! We had a non-traditional naming ceremony (or Ngente) close to 8 days after we arrived in The Gambia. The picture above is of all of us in our Gambian outfits at our naming ceremony posing with the kanyaleng who sing and dance at these events.

Traditionally a child is named 8 days after birth. Family and friends will gather in the yard outside of the families home on the morning of the 8th day to celebrate the occasion. Food and drink is prepared for the guests. The babies head is shaved and water washed over it's head because the hair it is born with is considered impure in Islam. The father is responsible for naming the child and keeps it secret from everyone until the ceremony where it is announced for the first time. First it is whispered into the child's ear and then it is announced to the family and friends by the griot. Children are almost always named after a family member or close friend of the family who is their namesake or toma. Some of this information I got from my own knowledge of the naming ceremony (I went to a real naming ceremony as well as attending my own mock one), but some information I got from accessgambia.com so click here for further information.

For the sake of our group our tomas family is the family we consider to be our Gambian family. Typically while studying abroad students may have a host family. You could call our Gambian family our host family, but we do not live with them. We live at Happy Camp so our family doesn't have an extra mouth to feed and so that we have a space of our own. My Gambian name is Angela Jallow. Angela is a Christian name and not a Muslim one so it is less common in The Gambia, but there is a population of Christians in The Gambia (Christmas is celebrated here actually!). Jallow is my surname and surnames are very important in The Gambia because it indicates what is your ethnic background. My ethnic background is Fula and I will come back to this later. My toma is 9 years old and she is the biological daughter of my language and culture teacher Baboucarr. I was pretty excited about this because this means that I am now his daughter and occasionally I call him papa. But it's also nerve-wrecking because he is a strict papa and I think I give him a run for his money. I indicated that she is the biological daughter because the Gambian family structure is much different than what I am used to in America. I know that my parents siblings and their spouses are my aunts and uncles and that their children are my cousins. However, in The Gambia your mothers sisters kids and your fathers brothers kids are also your sisters and brothers. Going along with this, your mothers sister is your mother also and your fathers brother, a father. This is a little confusing I know! A little bit more information on this can be found at this link. It's very cool though because the extended family is of such high importance here. At least in my own Gambian family many members of the family live in one compound. There are kids EVERYWHERE. More about my Gambian family later! 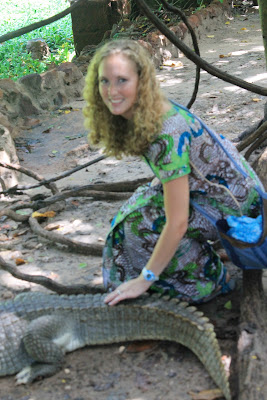 Our naming ceremony took place in Bakau right outside of the crocodile park there. So after our naming ceremony we all went to go pet a crocodile! It felt like what I could only imagine a dinosaur would feel like. Creepy.. but cool. 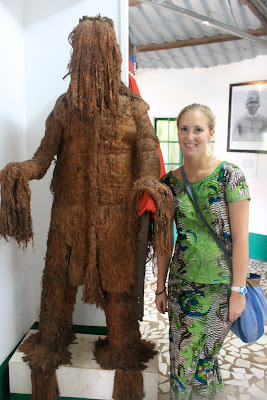 Then we visited the Bakau cultural museum. It discussed the history of Bakau and different cultural traditions of the ethnic groups there. Here I am posing with a Mandinka mask, the kankurang. It comes out in ceremonies associated with the circumcision of boys. I did a presentation on this mask in a class I had last year and I found it incredibly scary, but now I'm getting used to it. More information on the kankurang can be found here.

On a different note, notice the green decoration on my dress. The tailor did that detail all himself, the actual fabric I bought in a market and showed him the style I wanted. He did such a good job stylistically. The outfits are so beautiful, but it was incredibly hot and uncomfortable because the skirt is so long and the shirt is tight. I hope to get more fabric and choose a different style of dress/pants/shirt next time! I hope I don't embarrass my Americana friends too much when I wear my beautiful African clothes around :)