How I Got Here

The Gambia is a very beautiful country, but before I go into all my adventures I have to tell you how I got here. 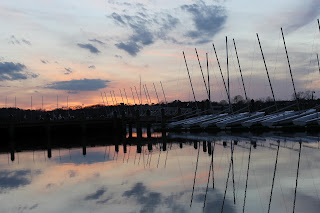 This is a sunset on the St. Mary's River at the docks of my school.

So I go to St. Mary's College of Maryland in southern Maryland. It is a small liberal arts school on the St. Mary's River for which it is named for (no it is not Catholic, no it is not an all girls school, no it is not private, no we do not wear uniforms.. I don't think I missed anything..) and I am studying anthropology. I am an Anthropology major with minors in Environmental Science and African and African Diaspora Studies. The study abroad program in The Gambia was started at St. Mary's (SMCM) by a professor who worked in the country while he was in the Peace Corps. 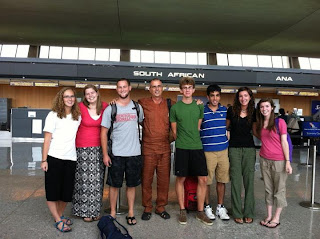 There are 7 of us traveling together. Left to Right: Me, Madeleine, Sam, the professor who started the program who met us at the airport, Austin, Daniel, Kaylie and Kyle. Besides Daniel and Kyle everyone else goes to St. Mary's. We flew into Dakar, Senegal and then took a van to Kanifing Estates in The Gambia (close to Banjul). It was a 7 hour flight and a 14 hour bus ride so you can only imagine how tired we all were. It was a crazy way to start the semester. We arrived in Dakar at around 6 am. We were approached by many men trying to carry our luggage for us. Even though we tried to say no many many times they would not listen and took our luggage forcefully then walked with us to our car. Afterwards they demanded money from us and everyone had to give, even though we only had American money and the smallest bill some people had was a 20... It was a frustrating start to the journey, but I did expect it something like it to happen.

The van we were to travel in to The Gambia was a 14 passenger van and the roads were paved for less than half the trip. Even when the roads were paved, however, there were pot holes everywhere that we had to bounce through them or swerve around. It was an adventure. By the end of the trip we were all hallucinating from about 24 hours of no sleep.

If you look at the map Banjul is just north of where the G is in Gambia. So Dakar and Banjul are not very far apart by water, but on land there are only a few places you can cross The Gambia River and we had to go up country to cross. We crossed the river bout halfway through our drive. The ferries here are very slow, but hold cars and people. There was a whole lot of people near the ferry pick up/drop off and we had to wait a couple hours to get on. Once we were on it started to pour (it is the rainy season is June until sometime in October usually and then it's the dry season). 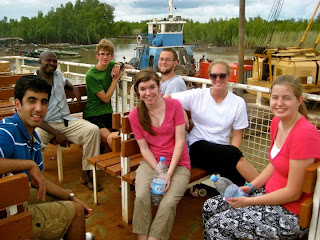 This is a picture of some of us on the ferry (before the rain) with one of our language and culture teachers, Baboucarr.

Us girls were approached by some of the workers on the ferry who asked us if we wanted to eat lunch with them. We did not have anything to give them in return for their food and we were still unsure of where we were so we declined graciously. The boys however accepted their invitation when they were invited and had their first experience of a Gambian meal. . Gambian meals usually always have rice and then some sort of meat with sauce and vegetables. Traditionally Gambians sit on the floor with a huge rice bowl and everyone eats out of the bowl with their hands.The boys were given spoons since the ferry workers knew they were tubabs (a word meaning foreigner in The Gambia but not in a  negative way). The Gambians were very pleased to have the boys to lunch and were upset with us girls for declining. Well, now we know to always accept food even if we don't have anything to give in return, it is a courtesy. When it is time to eat anyone who is around is welcome.

I learned a few things on that fairy ride: 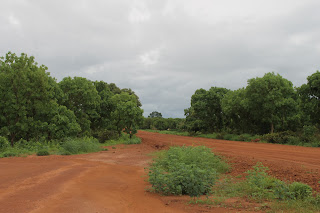 Which I love. I really appreciate the miles of nothing but trees and grass with the occasional village, but it was nice to see the river for the first time. I didn't get a picture of it when I was on the ferry, but here's a sneak peek of the river in Bakau which I'll talk about later: 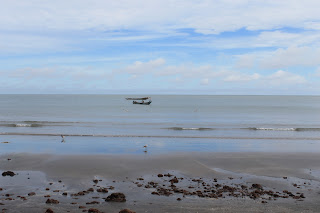 Stay tuned for my next blog post. I'll show you where we'll be living and then on to some African adventures!