Banjul: A Visit to the Capital

Our next trip was to Banjul which is the capital of The Gambia. We live very close by (about a 15 minute drive), but public transportation here can be difficult so sometimes it could take an hour getting there or back. We had drivers during orientation who would take us all in a van, but otherwise you would take a taxi from Happy Camp (or walk) to the main road in and out of the city, then take a gele gele or a large public transportation van. They'll pack a lot of people into one van and stop along the way to do so. I was talking with a student of UTG on the gele gele to Banjul one day and he said it would be much worse in other parts of West Africa. They'll put people on the roof or hanging out the doors of the vans, but he still didn't appreciate being packed in like sardines and told the driver so. It really isn't so bad sometimes, but other times you'll be on top of each other. They do have regulations to how many people they can put in one vehicle, depending on the size of the van. There will also sometimes be cattle in the road or other obstructions that could cause traffic jams. 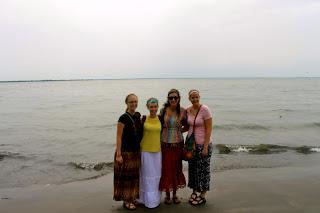 Banjul is located at the mouth of River Gambia and the Atlantic Ocean. This is a picture of the girls at the mouth of the river. One minute you're at the river and the next you're in a crazy market. 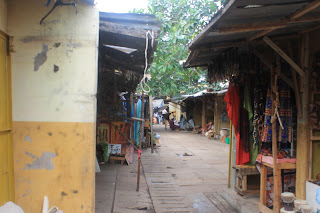 The Banjul market was less overwhelming than the Serekunda market, but we were told it's more expensive because it is in the city. I got a free token from a woman. She put a bracelet on me and when I insisted I wasn't interested in buying it she told me "No, this is a gift. You remember me." I felt bad, but I could tell she would find it rude if I refused. She ended up giving two other girls a bracelet as well. 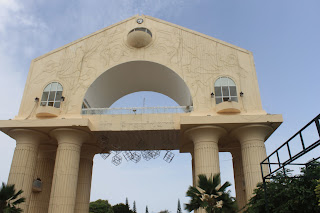 This is called Arch 22. The "Arch 22 was built to commemorate the military takeover of government on 22nd July 1994. It was built in 1996 by the then military government and marks the entrance to the city of Banjul. It was proclaimed a National monument in 2002." This information is from the National Centre for Arts and Culture which is the national museum of The Gambia. We visited that as well and it had a lot of historical information about the different ethnic groups in The Gambia and the history of The Gambia in general. It also had a silversmith that was making beautiful rings. I might have to go back there before the end of my stay... St. Mary's students have worked there in the past for the internships and one student this semester is doing so.

We made a lot of friends outside of the Arch 22. There were lots of children. Many of the children we come across will yell at us "Hello tubab" and sometimes ask for menti which means candy. 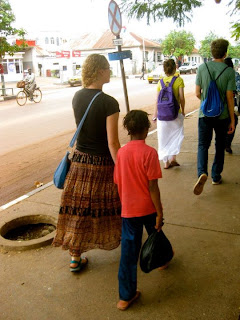 I held hands with one girl all the way down the street. We had a conversation in English/Olof and she was very nice. There were a couple other girls with her holding hands with other students. We gave them gum after they said they had to go home. 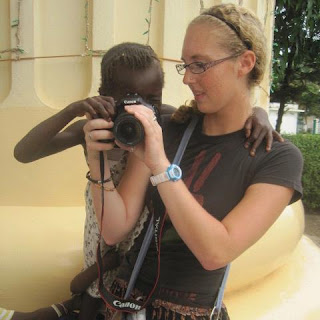 And then I taught another girl how to use my camera right outside the Arch 22. Kids love to ask to either take pictures or have their picture taken and then look at them. 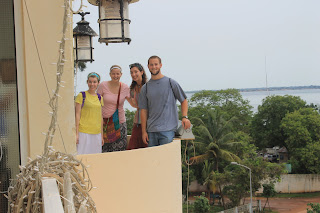 You are allowed to go up the Arch 22. You can take an elevator up or use a spiral staircase that was pretty dark and scary. We opted for adventure and took the staircase. There were some nice vantage points along the way like the one above. 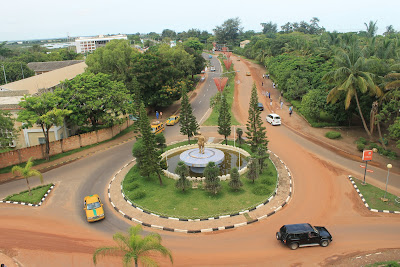 This is the view of the entrance to Banjul from Arch 22. 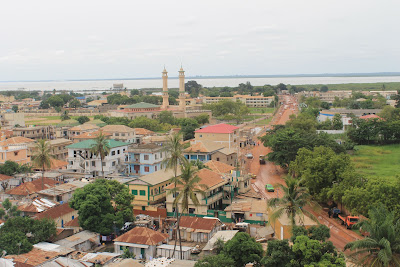 It was quite a beautiful view from the Arch 22. As you can see there aren't many high points in the city, no skyscrapers or anything overwhelming like that. But a lot of green. And you have The River Gambia in the background. Quite a beautiful city with lots of friendly people. We visited the mayor, Samba Faal, on our way in. He was very very kind to us. He had studied in the US and had St. Mary's students work with him the past. It was a nice visit.