Our next field trip was to the Serekunda market. This market was significantly bigger because it is not just a craft market, but an anything-you-could-possibly-imagine-and-then-some market. 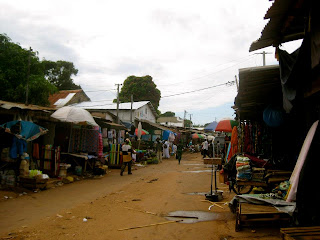 This is how the market is set up. Really a bunch of shops lined up against one another along a dirt road. 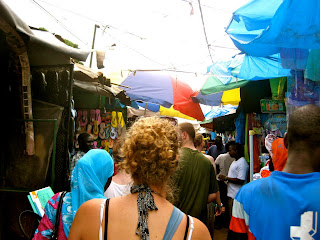 Some parts of the market were more crowded than others, but when it was crowded it was crowded! So many people trying to get you to buy things or just talk to you. It was crazy overwhelming. It is also very very big or at least it seemed that way. The whole thing was a complete maze and I have no idea how I would be able to navigate it by myself (our language and culture teachers were showing us the way), but I hope to be able to one day!

After walking around a while I got this great idea for a great gift for a friend of mine and I told Madeleine about it. Afterwards I was talking to a man outside a shop who was very friendly, he said it was his sisters shop and he asked me where I was from, I told him America and he said he had lived in America before (many of the Gambians we have met have family or friends in the Americas or Europe or have been there themselves for long periods of time). When I told him I was from Maryland he said he had lived there before! I was so surprised he knew of this little state and asked where in Maryland he had lived, but he said he didn't remember. At this point in the conversation Madeleine called my name and told me she found the gift I was looking for! I went down a narrow part of the market where she was and found the perfect gift. The man followed me and told me to go to his shop instead, but the woman who owned the shop Madeleine showed me already had me by the hand. The woman and the man started to fight and then a couple other women shop owners got into involved. I had no idea what they were saying, but they were all very loud, sounded angry and the woman had a good hold on me as if to say I wasn't to go with him. I wanted to go to the mans shop because he had been so nice to m, but then our language and culture teacher Daniel came to help me. He told me the women were saying he doesn't even have a shop and they were telling me I shouldn't go with him. This took me back a little bit and I didn't know what to think. I then had to start bargaining with the woman shop owner. This was my first experience bargaining and I have never been good at it. We were told to start very very low. She asked for 350 dalasi (about 32 dalasi equal 1 dollar) I looked to Daniel for advice, but he shook his head letting me know I was on my own. I offered 100 dalasi thinking this was a good deal, but Daniel shook his head indicating it wasn't. It was too late for me to change my mind now.. We went on for a short while, but eventually she gave it to me for 100 dalasi. I know next time to offer even less than that for a trinket. But every day is a learning experience no matter where you are!

I was still happy with my purchase and am very glad that I had my first experience with Daniel helping me out. He told me that sometimes shop owners have apprentices who help them get customers and the two share the profit. The man who I had been talking to was probably one of those. I understood this and I am prepared now to be cautious of this when I go to the market on my own. Needless to say it was an interesting experience, but I can't wait to go back again and put my new language skills to use as well as my new knowledge of market culture. 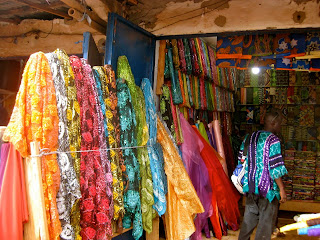 The next time we went to the market we had to buy cloth for our naming ceremony outfits (wewill all get Gambian names!). This is a picture of Daniel (the language and culture teacher who helped me in the market before) and in a shop with a bunch of beautiful Gambian material. There are so many different patterns you can choose from and then you take the material to a tailor where there are endless styles you can get it made into! I am so happy with how my naming ceremony outfit turned out and I can't wait to get more! Stay tuned to see!