Hey guys! Sorry I have not posted in a while, there have been some minor difficulties. Either the power was out, the internet was down or I was having incredibly too much fun to sit down and write a post for the past week or so :)

I'm gonna go ahead and tell you about what I did this past weekend even though I'm missing some things in between. I'll catch up eventually! Seems like I'm on Gambian time now... 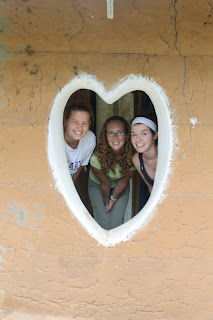 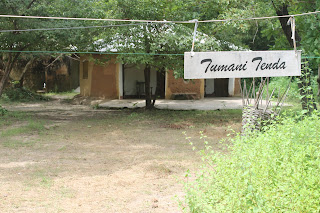 Well Friday we left mid-morning for Tumani Tenda Eco Tourist Camp. It's only an hour and a half away from Happy Camp so it wasn't too long a drive, but it was also a nice break from the "city life." Tuamni Tenda is a Jola village that created an eco-tourist camp just outside the village on the water. the camp has helped the village in many many ways. Some of which I will talk about in a bit. Here is the website for the camp.

To us Tumani Tenda was a lot like Berefet. Except we were less shocked by the more rustic lifestyle. I don't even consider it rustic anymore. We took some time after our (amazingly delicious) lunch to visit the village. Our first stop of course was the alkolo or the village chief. He was such a nice man. We could not understand a word he was saying and he could not understand us, but we still managed to have a great conversation with him through our interpreter. He did not speak Wolof because it is a Jola village with Jola as the main language and some Mandinka spoken by elders with the younger generations knowing more Wolof. He was so happy to have us at the village and thanked us a lot. We presented him with kola nuts as is the custom here in The Gambia.

Then we explored the village. Went to the bakery which was new and a big deal to the village because they could make their own bread fresh daily. We ate it for breakfast and it was delicious.

Then we visited the school which was very nice, some of the facilities were built by the government and some supported by the village. Most of the proceeds from the eco tourist village go towards the schools and it helps every student who attends (whether they are from Tumani Tenda or not) to afford food during the school day. It also goes towards supplies and maintenance.

Then we walked around the land. Most everyone in the village is a farmer so every tree or plant we passed by we were told it had some sort of use. Mostly for food, but also some medicinal purposes. Throughout our time in The Gambia so far Baboucarr has pointed out plants to us that have medicinal purposes and I wish I could remember every single one. We learned while we were in Tumani Tenda that the word for plant and medicine is the same in Wolof which I found incredibly interesting and logical.
The next day we visited the rice field which provides all the rice for the village (and Gambians eat A LOT of rice). The rice is not for export, but for local consumption. While we were there we met the men who take care of the fields. The main job of the men we met was to keep birds and bats away. To do this they used a sling shot and they let us try. We were all very bad at it, but it was fun! We each got one made because we thought it was so cool! They put balls of clay in the sling shot then fling it at the birds. They used to be used to scare away larger animals, but most African wildlife are no long present in The Gambia besides the occasional leopard and hyena then crocodiles, monkeys and hippos.

Before we visited the rice fields, however, we went on a sunrise boat trip on the creek. It is so easy to get up early here (and I am not a morning person) because you are so intimate with nature that you get up with the sun (and with the very loud and very numerous birds). There is also little electricity therefore it's harder to stay up later. 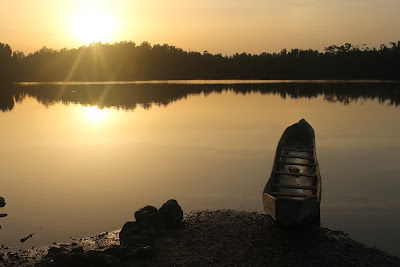 Needless to say our trip was so beautiful. I was rowing alongside our guide the whole time, I was proud of myself for not handing it off to someone else because I got less than an hours sleep the night before for some reason haha maybe because it was a new place? We saw some fishermen who were neck deep in the water trying to scare fish into their net, we saw some birds and the sunrise was beautiful of course. However the best part had to be when we saw monkeys!! I saw something about the size of a dog creeping along the shore and asked our guide if monkeys were common here. He said they lived around the area, but it was rare to see them. Well what I saw turned out to be a monkey and then 1 monkey turned to a bunch of monkeys! They were all crowding in a nikom tree for breakfast. It was amazing. Nikom is actually a very delicious fruit and it looks like this: I enjoyed it a lot. It was sour and sweet at the same time, like a sour patch kid! 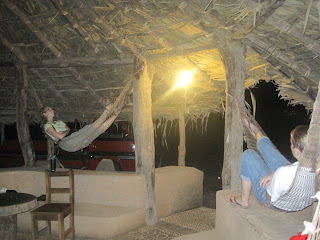 The rest of the trip we spent lying in hammocks, reading or playing games. Needless to say we're all pretty sure we're on vacation and not really doing much of the "studying" part of "study abroad."

Here are some more pictures of our trip:


When we got back on Sunday right before lunch we were greeted by the Ganzel family. Professor Sandy Ganzel is a mathematics professor at St. Mary's College and is doing is sabbatical in The Gambia. His wife and two young daughters are staying here for a year with him. They will be living in Happy Camp with us for a week and then moving into their own house. It is so nice having kids around, there's never a dull moment and we got to show them the beach and some nice restaurants on Sunday. After dinner three of us went out to a bar to listen to some live Gambian music. We stayed out late despite having school the next day.. It was such a nice night we didn't think it would be right to spend it inside sleeping.

In case you didn't know it already: it was an amazing weekend. Hope it was for you too!